O my faith, my untamed knowledge, how shall I fly to your height and see with man’s larger self pencilled upon the sky? – Out of My Deeper Heart (Kahlil Gibran)

I remembered once, while peering into the viewfinder of my newly acquired camera some years ago, a seasoned photographer gently reminded me that “the difference between painting and photography is the canvas that you begin with. With painting, you start with a blank canvas and you gradually add in your subject. Whereas with photography, you begin with a full canvas, and it is the eye of the photographer which is required to skilfully edit out the subject that is not needed to make the picture meaningful and beautiful”

This was during one of those random phases in my mid-20s in which I wanted to try every aspect of art, like throwing pieces of bait into a lake and seeing which one gets hooked first. I was in Petaling Street, and it was a short walking photography course. It was also when I learned that critical difference between a beautiful painting and a beautiful photograph.

Like photography, our understanding is framed within our own experience, coloured by an understanding that is unique across individuals, and almost always never the same between two people. Whether we are willing to admit it or not, the way we view the world is edited. Certain subject are given extra focus, while the rest, and sometimes equally as important subjects are given less emphasis, blurred into the background. We truly see what we really only want to see.

Yet, I believe we stand to miss out on the beauty of life if all we do is to remain perpetually stuck in this ‘editing’ mode. If we are constantly busy removing subjects out of our frame because it is less then what we view as ideal. If we are always kept busy at focusing on one subject, and allowing light to expose the best feature of a single item amongst a sea of equally beautiful subjects. Part of what makes photography exciting I believe, is also the waiting. Time spent in a momentary stillness, watching and observing within the viewfinder until the ‘right’ subject walks in and captured at the perfect time. But what if there is no such thing as a right subject nor a perfect time? That every moment, every frame and every picture stands in its own right, perfect as it is. Because what may be beautiful for you, may be something that I may not be able to appreciate at all. Art is subjective, and elusive. And that is why it can be called beautiful even if it is the most random lashing of spilled paint on a blank canvas.

An artist (who paints!) once said on an interview “art is not meant to be understood, because by trying to understand you confine its meaning within your own experience, interpretations and biasses. Art is to be felt by the heart, and not to be interpreted by the mind”

And so it is, rather than spending so much time editing, creating and moving our life about towards that one perfect, ideal picture, perhaps it is better to go beyond and above this concept, “to fly to the height of your untamed knowledge” and feel the vastness and perfection of life from this perspective instead.

Food was one of the major highlights in Italy. There was rarely a time that I could even begin to feel hungry before our next meal, and even if it was a hunger pang that I felt, it was one that was satiated pretty quickly.

Our food and accomodation expenditure started out on the high side. Rome was more than just statues and ancient ruins, but filled with delicious meals of tortellini, ravioli, all other kind of pastas, fresh artichokes and colourful vegetables, pizzas, cheeses and endless scoops of gelato. Other people approach their travel with a trusted guide from the Lonely Planet, I moved through the city with a guide on recommended places to eat, districts known for food and areas with weekly markets. Basically, I was more keen on building my experience around seeing and tasting the local food more than visiting the historical sites *blush*.

I believe, the best way to appreciate and experience a place is through its local food.

Italy was all about fresh ingredients. I’m convinced that is the reason to why Italian food in Italy tastes distinctly different and much better than Italian dining in Kuala Lumpur. Even if the latter was cooked by an Italian chef in a 5 star Italian restaurant, it still does not compare to say a 3 Eur Margherita pizza in Naples

There is no doubt that Italians love their food. I did see some Chinese restaurants and kebab stands randomly scattered around Rome, Naples and Florence but the occurrence of this was far and few in between. What I loved was the availability of fresh vegetables, herbs, pastas, breads served straight out from the oven and of course, freshly brewed coffee. We trawled through a number of mercatos and I was spellbound by the colors and sight of it all. 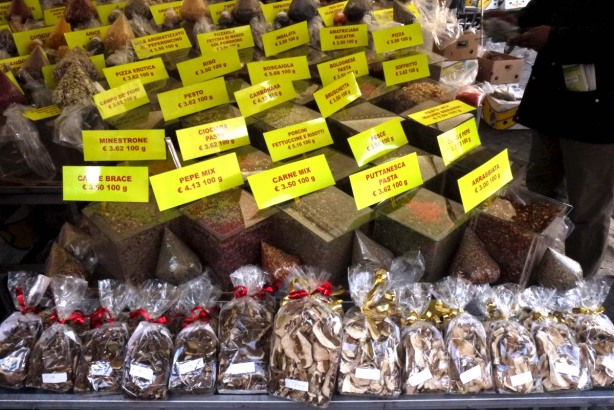 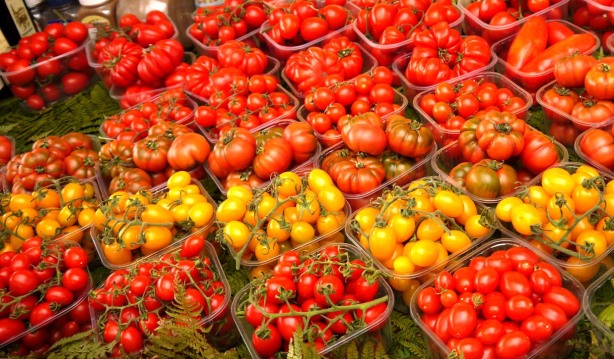 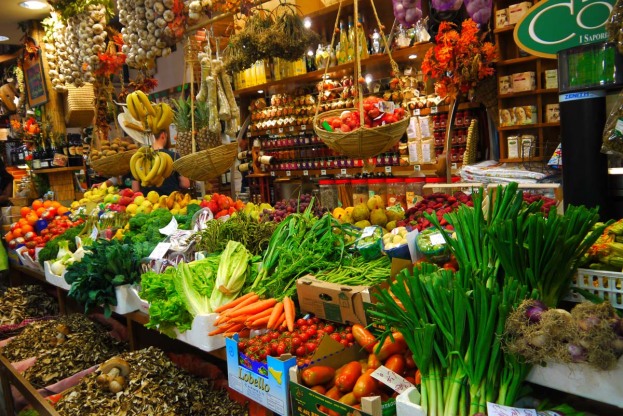 Although organic did not seem like a big deal to the Italians, partly because everything they have is grown in an environment with minimal exposure to chemicals and pesticides or we were just looking in the wrong places. I stand to be corrected.

Italians were also big on their truffles, and rightfully so. This stuff is gold in the culinary arena. But whoever thought of combining sea salt with pieces of truffles must be pure genius. I got a sniff at it and the flavor that exploded out of the bottle was indescribable.

Certain moments and sights remind me of the famous Queen Victoria Market in Melbourne, Australia which was my weekly sensory indulgence and also where I used to stock up on my groceries every weekend as a student. It was also the place which led me to eventually appreciate markets, fresh produce and knowing the ingredients that will eventually become my food.

Having an appreciation of amazing food is half of the equation, being aware of how individual ingredients are produced, its impact on the environment, the benefits it will bring to you and how it will ultimately nourish and heal your body completes the experience of enjoying a certain dish or meal.

It goes without saying that I am obsessed with food. I was taught from an early age, if you had to a limited amount of money to spend, always, always scrimp on the clothes and other inedible things, but splurge where you can, on the food. And splurge on food in Italy, I did.

A week in Italy made me realize there are certain things about the human life that is common across the world, irrespective of culture, skin colour, religion or where you come from. It’s like the world speaks to you in its own universal language through human behavior.

M. Scott Peck in A Road Less Travelled began the first chapter of his book admitting that “Life is hard”. True that our life’s struggles come in many form and shape but in Rome, I learnt that these challenges are more often the same no matter where you live.

On the third day of our trip, I caught up with a colleague whom I met at training in Chicago last year. We were brought to a trendy, recently-launched lounge which operates a health spa during the day where I met his tall gorgeous redhead of a girlfriend and a handful of his other friends. We got down to talking about everything that makes Italy home to them. A group of twenty-something commiserating over getting life into momentum in a mix of English, Italian and a lot of expressive hand gestures. For a while, they were bantering in Italian to what seemed like a heated debate. I got another one of the girls to help translate for me and it appeared they were discussing about ‘love’ issues. I guessed it must have been one of the girls complaining that her other half had forgotten to take out the trash that weekend.

Once the conversation turned to English, we eventually gathered that one of the girls hated her job but the money from it affords her to pay her half of the mortgage of their recently bought apartment. The infamous question of “should I stay in this mundane job and keep earning the bucks or should I risk it and pursue my passion?” was raised.

I don’t know about you, but it definitely does to me. As the conversation developed, I got the impression that a majority of the working class young adults in Rome do not have it easy in their initial years setting up a nest of their own. And by that I mean moving out, starting a career, long-term relationships, marriage and kids. At one point, their wide-eyed look felt more like eyes that were about to pop and roll on the floor towards the DJ and his turntable when we told them the price of petrol per litre that we, normal working class Malaysian citizens pay.

For a while now, my itchy feet has been longing for me to move out of the country and earn a living elsewhere. That night I realized, there are a LOT of things to be thankful for by remaining in my home country – government petrol subsidy being on those things.

Reading poetry into the sunset

And then there is love. Whether you are down South in Australia, or the on the China Silk Road, or up north in an unfamiliar European country, the language of love is immediately understood. The photo above was taken in Piazza del Campidoglio, where an Italian couple were sitting together at dusk reading each other poetry.

Massimo, who were one of the friends we made in that lounge that night told us the story of how he met his current wife, this beautiful lithe blonde next to him. A quick private snicker was shared between the two when asked how they had met, before he turned to me and asked “Are you sure you really want to know how we met?”.

I always enjoy listening to stories of how two people met. Theirs by far, is one of the most hilarious and wonderful ones I have heard thus far. For the next 1 hour, we learnt that they had met years ago on a movie set (how surreal!) and shared their first kiss on the screen because they were directed to do so. A few years of break between the two as each went their separate ways, they met again but each were now engaged to different people. It made me realize that life, really has a way of leading you through it with some crazy twists and turns. Today, they have been happily married for a year and a half and they speak of each other with that comical sense of fondness that kept us laughing throughout the night.

I saw a lot of things, tasted many delicious food and drink, felt a range of emotions from intrigued to complete exhaustion (which could only happen if you have been on your feet for a full 12 hours, walking, climbing up and down many hills, getting on and off trains and buses over a number of days) while in Italy. Many more entries (and photos!) to follow on my perspective of this trip soon 🙂