Now that I have been having a little more time since ending a rather crazy project, I have been getting more chance to make smart and educated choices when it comes to what I decide to put into my mouth. My kitchen will have these cycles, of frequent use and constant turning on and off the gas stove and when things get hectic at work, the only thing that ends up being used is the water filter and the kitchen tap. So while I have these little luxuries (which I have this sinking feeling will be shortlived indeed), I’ve decided to pay a much needed visit to the supermarket and stock up my refrigerator with the healthiest things I can find (and afford).

With a rough meal plan for the week worked out and armed with my list of things to buy, I walked down the all to familiar aisles of Jaya Grocer. Of all the supermarkets around Subang & KL, I still prefer my neighbourhood’s Jaya Grocer. Even the posh and overpriced Jason’s at BSC can’t seem to beat the lineup or organic items offered in the former. Months of not doing my groceries gave me a rude shock when I got hold of a bunch of organic celery for a soup I was planning on making. RM 35 (USD 12) for a bunch of celery?? Okayyy..let’s put that back down. And then some weird craving hit me while I was there and I decided to look for some blueberries. Organic blueberries – RM 25 for a small box. Whoa.. maybe not. With such horrendous, out of this world prices for the standard, middle class person such as me, how does one achieve healthy eating and minimise all those nasty pesticide and chemical intake?

Recently Food Matters together with the Environmental Working Grop updated their list of dirty dozen which is a list referring to 12 most ‘dirtiest’ veggies & fruits that should be bought organic where possible and 12 clean items that you can get away with being non organic most of the time. This year however, they added a few more and this has been a good list for me to keep in mind as I trawl up and down the aisle collecting my goods in the trolley.

Click on the link and you will find more information and even a pretty nifty phone app for you to download. Granted that this list is more American-centric, I would imagine it to be pretty similar across other countries especially those that import their food from large agricultural producers.

With this in mind, I now know I should skip on the celery and replace it with something locally grown. Blueberries (generally the berry family are to be treated like strawberries in the dirty dozen list) are out of the question too. So more papayas, dragonfruits and mangosteens it shall be! A general rule of thumb that I use would be – if you have to peel it in order to eat it, that would generally be ‘cleaner’ rather than items that you consume directly as they were bought.

Most definitely, one must keep in mind local is always better. But with certain fruits like the avocado that contains large sources of good fat, and all that other goodness in its green flesh, sometimes it is difficult to replace it with a local alternative that is equal in nutrition content. And by all means, if you are swimming in money every month, heck if it was me, I would buy those celery and blueberries once in a while because I know I can afford to.

For us normal beings though, sometimes it is a good idea to splurge on some organic items (local over imported where possible), and scrimp on others where non organic would be considerably safe for consumption. 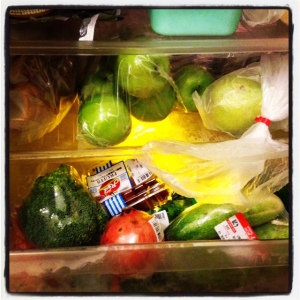 A well stocked fridge is a happy fridge 🙂